We offer a variety of cars for sale from stock and on behalf of clients, from complete cars to build and restoration projects. If you have a car for sale or are searching for something special, please contact us and we will be happy to help. 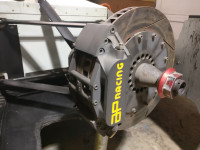 Lola-Porsche SRP / Lola B2K/40 (Chassis HU12)
Truly unique, Masters and Peter Auto Eligible. The closest thing to a brand new B2K/40 that money can buy.
- Pit Lane Spares are proud to offer this one-of-a-kind Lola-Porsche B2K/40.
- HU12 was the only Lola B2K/40 fitted with a Porsche engine and sanctioned by Porsche. It is also the only car to feature Gulf livery.
- Various features, unique to this car.
- Fascinating, documented history.
- Unquestionably the lowest mileage B2K/40 in the world. Car is believe to be still on its original brakes!
- Hewland LSR gearbox, wishbones, dampers, wheel hubs, uprights and rear suspension components all brand new (original new Lola stock supplied by Pit Lane Spares).
- Eligible for Masters Endurance Legends with Porsche engine (air-cooled, 962, GT1  or 996-based road car engine for a very reliable and easy to run machine) or Nissan AER Engine. Car fitted with original Porsche mounts.
- Peter Auto Endurance Legends eligible
- Car is offered as a rolling chassis with all parts less engine and installation parts.
- Supplied with a spare package, tailored to order. Almost all B2K/40 parts are available new from our stock.
- Offered with significant discount on future spares purchases.
Price: £98,000
Part Exchange Considered

Nismo GT-R GT1
The most famous R35 in the world. The FIA GT1 Championship-winning no.23 car.

Pit Lane Spares are incredibly proud to offer one of the most famous cars of the modern GT era and a genuine piece of motorsport history; the #23 Nismo GT-R FIA GT1 Car.

Run by JRM in its famous red and black livery, this car was the first Nissan to win a world championship, cantering to victory in the hands of Michael Krumm and Lucas Luhr.

#23 (the flagship 'ni'-'san' number) is 1 of only 5 Nissan Nismo GT1 cars produced, running throughout 2010 before being driven to 4 podium finishes in 2011 GT1 drivers’ championship to clinch the title.

Then and ever since, the car has been maintained by JRM and has toured the world representing the brand at prestigious events, including multiple appearances at the SRO Gala Awards in Paris.

The bespoke 5552cc VK56DE V8 engine sounds like nothing else on earth, transmitting 600ps and 650nm of torque through a transverse, magnesium cased Ricardo 6 speed sequential transaxle and out to the rear wheels.

At 2040mm wide, this is one of the imposing vehicles of its time. Virtually everything on the car has been designed from scratch with the sole purpose of winning championships at the highest level of GT racing.

In short, this is one of the most competent and historically significant cars of an already exceptional breed of GT1 vehicles and the most desirable of the ultra-rare Nismo GT-R GT1 cars .

Now in private hands, the car is presented in superb race-ready condition after being re-prepared by JRM in the summer of 2018. With GT1 cars of this era on the rise, this famous car represents a remarkable investment opportunity and an extremely competitive package for historic racing.

Nismo's own technical breakdown of the GT-R GT1, can be found at the link below:

The car is available for viewing in the UK and further details, photos and videos are all offered on request. 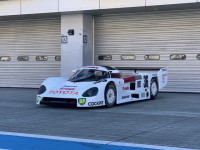 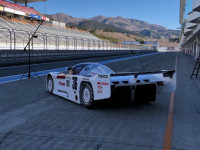 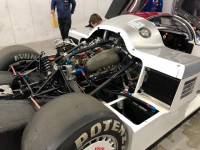 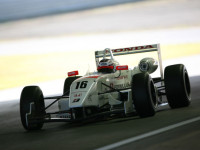 **SOLD** 1988 March 881 Leyton House Experimental Chassis **SOLD**
Designed by Adrian Newey, this March 881 evaluation chassis was bought directly from Leyton House in 1992 and remaining in the same collection ever since. Built to rolling chassis specification using genuine Leyton House parts and moulds (also purchased directly from Leyton House).
The car was displayed in a museum from 1996 through to the mid-2000s. In 2017, the car was repainted throughout and new parts manufactured to suit including lower wishbone covers, mirrors, mounting stays, rollhoop, dashboard, side panes, seat, shoulder harness pads, antenna, gauges, buttons, chassis plate, steering wheel were made to suit. An original exhaust system, front wing side plates, etc. were also fitted.
The original gearbox casing is present and the car is sold as a superb display car or relatively straightforward project for anyone wishing to make this a running vehicle. A huge stock of original Leyton House parts and moulds are also available to purchase, along with a Honda Acty Leyton House Pit Truck replica and genuine original Ivan Capelli helmet.
The car is located in Japan and the current owner speaks excellent English. Pit Lane Spares can assist with all elements of purchase.
Price: £SOLD

- Owned privately in the UK for many years before being purchased and restored by the current owner in the mid-1990s.

- Original BRM bodywork and many other original parts throughout

- The car is located in Japan and the current owner speaks excellent English. Pit Lane Spares can assist with all elements of purchase. 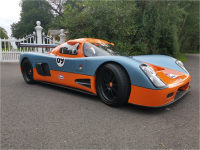 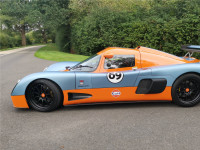 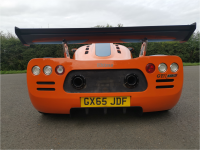 Put simply, the Ultima GTR is the closest thing to a road-legal LMP car that money can buy, still holding the Guiness World Record for a 0-100-0 dash and stop.

With perfectly balanced chassis, this fine example is matched to a Corvette LS3 6.2ltr V8 (producing 600bhp) and a Porsche six-speed G97-50 gearbox which provide for incredible outright performance.

First registered in 2015 this Ultima GTR is a rare lightweight sports car, presented in superb condition throughout with only 16,563 miles from new.

Built using a space-frame chassis and GRP body panels, the Ultima GTR is a sleek but purposeful design. This particular car was supplied by the factory in kit form and built by an experienced Motor Engineer using new components throughout. A certificate authenticating this is supplied with the car.

It also features the desirable extras such as the carbon-fibre rear wing, side sill extensions, and air scoops ahead of the rear wheels. There are also carbon-effect headlight surrounds, a carbon-fibre air box linked to the roof scoop, and a carbon-fibre rear diffuser. The car rides on pristine 18-inch Forgeline alloy wheels - a £6,000 optional extra - which are finished in matt black and shod with Michelin Pilot Sport tyres. Mechanically the chassis has benefitted from a number of improvements over standard, with full geometry setup, modification of the steering rack positioning and a CAE short-shift system. The cooling has also been improved by an upgraded radiator.

The cabin is equipped with supportive and well-padded bucket seats trimmed in black leather, with adjustable lumbar support, which are complemented by orange four-point Luke safety harnesses. The leather trim also extends to the dashboard panel, while the lower sections of the interior are finished in polished metal, including the double-skinned aluminium bulkhead. There are exposed RS gear shift mechanicals housed in a carbon-fibre console, as well as a Lifeline fire suppression system, and an OMP steering wheel trimmed in Alcantara. Ahead of the driver is a digital dashboard readout. There is a small amount of luggage space available in the bins beneath the door sill covers.

It was last serviced in September 2020 with new oil and new filters, brake fluid and re-gassing of the air-conditioning system. The gearbox oil was also change during service in July 2019.

Keep up to date with what's going on at Pitlane Spares.

We have recently added a number of new Lolas to our website including T92/50, T97/20 and more. We also have new cars for sale including the glorious no.23 Nismo GTR GT1 plus loads of Xtrac parts, Hewland NLT parts and various complete gearboxes just in - be sure to take a look or get in touch!

We have just added the T97/00 to our Lola shop. We have hundreds of parts for these cars, all brand new. This section will be divided into categories in months to come but for now you can see all parts here.

Welcome to the new Pit Lane Spares website! The new site allows you to: - Find and view photos of thousands of parts in stock and available to order - Search the website by part number and download a list of all available parts for your car / gearbox - Download our entire Lola,...